Schools in a Time of Chaos

(Note: I originally wrote this in July, 2016. I wish I could say that we’d evolved since then into a much more sane, loving, enlightened, literate, just society. But as you’ll see, almost all of it could have been written this week. What will we do to make sure this post won’t be relevant four years from now?)

To try to capture the last week in the U.S. would be folly. Police shooting and killing civilians. Civilians killing police. Live-streamed death. FBI probes, Congressional hearings, riots in the streets, political sniping, racial invectives. It’s sad, scary, and fatiguing all at once.

And, it’s disorienting. As George Saunders wrote in an amazing essay in the New Yorker:

I’ve never before imagined America as fragile, as an experiment that could, within my lifetime, fail. But I imagine it that way now.

(And that was written before last week’s shootings had occurred.)

I’m nowhere near eloquent or smart enough to offer some sweeping analysis that puts this moment into some sensible context. It feels as if the symptoms of our illness are pointing to a difficult diagnosis for which there is no known cure. Yet giving up on a fix is not an option because the alternative is, well…

And there are layers to this that transcend sense-making, rooted so deeply in our histories, our dreams, and our disappointments that they are beyond any clear articulation. It’s not just that the illness has no obvious cure; it hasn’t a name either. It would be easier if this was just about race, or just about class, or just about political illiteracy, or just about technology. Instead, it’s about all of those and more, a thousand-piece puzzle that comes without the picture on the top of the box to provide a sense of what “whole” looks like now. 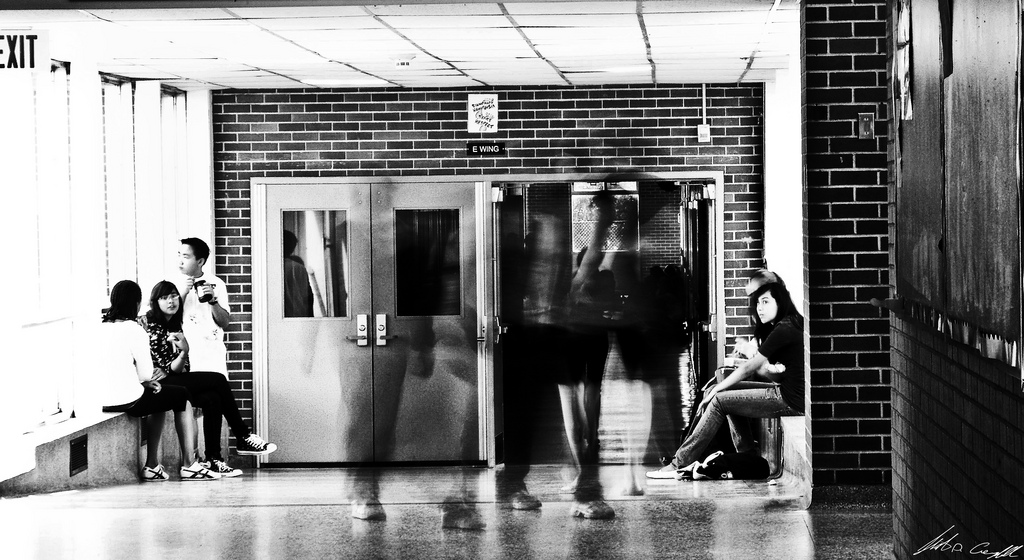 The scariest part is that it feels like we are ill-equipped as a society to deal with what’s being unearthed. We are, to quote Alvin Toffler*, “grotesquely unprepared to cope with” the overwhelming shifts that we’re experiencing. We are not talking at length or with reason about our differences, be they red and blue, black and white and brown, or rich and poor. Perhaps we are unable to now at a time when social media pulls us to our own little information bubbles with increasing ease, where anonymity provokes the worst in our natures. The digital literacy divides that surround us make it exceedingly difficult to hear the “other side” much less understand it. At a moment when we most need to listen and engage in respectful dialogue, we’re content to just be stunned as to why everyone doesn’t see the world as we do.

It’s a moment captured brilliantly by Katharine Viner in the Guardian, who writes:

Now, we are caught in a series of confusing battles between opposing forces: between truth and falsehood, fact and rumour, kindness and cruelty; between the few and the many, the connected and the alienated; between the open platform of the web as its architects envisioned it and the gated enclosures of Facebook and other social networks; between an informed public and a misguided mob.

What is common to these struggles – and what makes their resolution an urgent matter – is that they all involve the diminishing status of truth. This does not mean that there are no truths. It simply means, as this year has made very clear, that we cannot agree on what those truths are, and when there is no consensus about the truth and no way to achieve it, chaos soon follows.

The chaos, across the world, has begun.

I’ve been wondering a lot about education’s role in creating this moment, but even more, its role in fixing it. Ever since Donald Trump blurted out the line “We love the undereducated” in a victory speech a few months ago, I’ve been thinking about the extent to which the current education experience has tilled the soil for what we are currently reaping. We’ve been hell bent on sending kids out into the world that are “college and career ready.” But are they “community ready?” “Country ready?” Are they aware of the pressures and challenges of our democracy? Do they have the tools to express themselves clearly and respectfully about difficult issues, and an empathic disposition that allows them to listen with focus and understanding? Have we allowed them to grapple with these big issues in our presence, with our guidance and modeling to the point where they are able to be thoughtfully engaged?

And can our children truly be “college and career ready” if they are not first “community ready” to their core?

Further, we in education have done rather abysmally when it comes to understanding the profound effects of technology on the basic functions and literacies of our lives. We continue to run from all of those unknowns, those powerful affordances that recenter individual learning and creating and communicating in the world today, instead of embracing them and seeing them as, now, the fundamental focus of our work. As I’ve said before, we would never revisit a physician who disdains a fluency in the latest technologies to treat his or her patients. It doesn’t really matter if that person is afraid or doesn’t have time or feels beset by change. Professionals seek innovation. Professionals understand that the best way to serve their clients is a mix of old and new. Professionals adapt. By any measure, we have not conducted ourselves professionally on those terms.

Is there any question that we have sacrificed many of the life literacies that we all could certainly use right now in our worship for standardization, ranking, data, and those things that are easy to measure? The ability to feel empathy for others, to discuss difficult topics with those who disagree with us in ways that don’t end up in a viral video, to “cope with” change and, importantly, to adapt to new realities of every shape and scale. We’d rather teach the safe stuff, the state bird, multiplication tables, the Battle of Antietam, and Shakespeare, in the safe way, where none of it gets co-mingled and messy and iterative. The black and white version of schooling that predominates now leads our students to an “education,” yet leaves them “undereducated,” illiterate in modern contexts, and deeply resistant to complexity.

And so the question remains, only with even more urgency as chaos reigns: Will we change? Can we?

Which brings me to an essay by Larry Paros, an 82-year old former high school math and social studies teacher who reflected in HuffPo this week on schools in chaos at another time in our history, back in 1968. Faced with racial strife, political unrest, a protracted war, civil disobedience and more, Paros and his colleagues at Yale decided to forge a different path in terms of schooling.

These students were as confused as we were as to the meaning of the events unfolding before them and how best to respond. The external turmoil reflected all too accurately the inner contradictions of our staff and students, bringing sharply into focus the conduct of individual lives as well as that of the nation.

For us it could not be business as usual. One could not simply seek refuge from these forces at our schools and universities. Schooling was part of and not apart from society. Rather than simply sit by idly, reflecting on these events, our schools were morally compelled to step forward—to generate new thinking, alternate visions and active approaches to the events of the outside world consistent with the needs and demands of its students. This was the stuff of a real education, intellectually challenging and spiritually and politically transformative.

As with all of the links in this post, I sincerely urge you to read the whole thing. Instead of running from chaos, Paros and his peers embraced it. Instead of resting on “success,” school became a laboratory, a place to try to answer the unanswerable. A place to, perhaps, work on a cure. It’s an inspirational vision of what school ought to be. And without overstating it, it may be a vision that ultimately saves us. Only, however, if we recognize the urgency for change right now.

Lest we forget, schools, like democracy, are an experiment that carries no guarantee of success. But much like democracy in this moment, there are entrenched stories that we tell about what schools are that make it difficult to negotiate what schools ought to be. We are disoriented as much as the next institution, yet instead of embracing it, instead of taking on the heavy lift of figuring it out because we teach kids (#guilttrip), we’re doubling down, spending billions on gadgets that put a modern sheen on the status quo, hewing to the test, waiting for everyone else, parents, universities, policy makers and vendors to reset the bar for us.

If we continue to do that, we are not just setting ourselves up for institutional failure in the long term. We are failing our kids, and the society we deliver them to, right now.

(* As quoted in this essay by Farhad Manjoo)

So, the “2017 Predictions” posts are starting to flow, and while I’m certainly interested in the education prognostications, I’m more interested in what people are saying outside of our field.

I’ve been thinking more about story since writing this recent post, and I’ve come across some more reading and thinking that I’m trying to make sense of. (If you haven’t

“The role of the teacher is to create the conditions for invention rather than provide ready-made knowledge.” ~Seymour Papert, (The Connected Family: Bridging the Digital Generation Gap, p45) Right now,