Now, For the Teacher 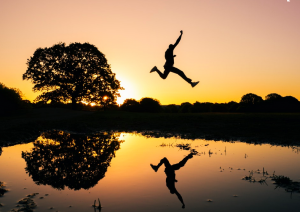 At one of the near non-stop family and friends events that happened in the days surrounding the holiday, one moment particularly stands out.

Adam, an 11-year old young man whose family got asylum from the Congo a decade or so ago, started cartwheeling his way through our house, with an occasional back walkover thrown in for good measure. That he had some gymnastics talent wasn’t a surprise; we’ve been shuttling him back and forth to the local club for about six months.

But then, Adam kicked his leg literally straight up in the air, caught it and held his knee to his ear, and did a pirouette.

Among those watching was a friend with some connections in the dance field, and he immediately asked, “Adam, where did you learn to do that?”

“I watch YouTube videos,” he said, “and imitate what they do.”

These days, no one is surprised by that answer, I know. But it still kinda stunned me. At our request, he launched into a bit of an ad hoc routine that left all of us even more impressed.

We all agreed, he’s got some amazing raw talent. Now to find the other part of the equation: a teacher. For as much as watching YouTube can be a start, Adam needs someone to watch him as well.

From the “I’m An Ex-English Teacher and I Can Make Up New Words Department:” We have a huge focus in schools on literacy, and deservedly so. Almost no one argues

Yesterday, I ran across this quote from Degreed, an online credentialing site: “The future doesn’t care how you become an expert.” Now, is that a marketing pitch or a reality? Obviously,